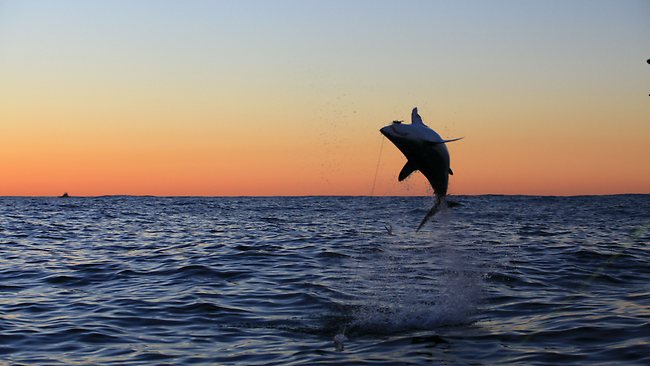 One of the ocean’s most charismatic creatures, the mako shark, has been putting on a show all winter, delighting game fishers off Sydney.

So many makos have been calling the city waters home that a record number were tagged and released at a game fishing tournament last weekend.

The increased numbers coincide with a Tasmanian-led project which is using our waters to investigate how recreational fishers can tag and release the sharks in the best – and safest – way possible.

Rob French, from the University of Tasmania’s Institute of Marine and Antarctic Studies, has tagged six makos off Sydney – two at Long Reef and four at an underwater seamount called Browns Mountain, 40km offshore.

“Coming to Sydney has been really rewarding. There are a lot of makos around here so it’s been a great place to try to tag them,” Mr. French said.

“We are putting electronic satellite tags into the sharks to see how they cope with tag and release.”

“We tagged one shark right at sunset and it was amazing watching it leap into the air against the setting sun as we brought it to the boat on rod and line to tag,” Mr. French said.

Sydney’s game fishers have also been taking advantage of the mako madness off the city. During the Sydney Game Fishing Club’s Geoff Woolley Memorial Mako tournament last weekend 163 sharks were tagged and released – and all but five were makos.

Little is known about why and when makos move along the NSW coast, or why they have been in such large numbers of Sydney this winter.

But Mr. McGlashan said one theory gaining currency, at least for Browns Mountain, was that they had learned the area provided easy meals.

They are stealing bottom fish being hauled to the surface by the increasing numbers of fishermen visiting the marine-life rich seamount.