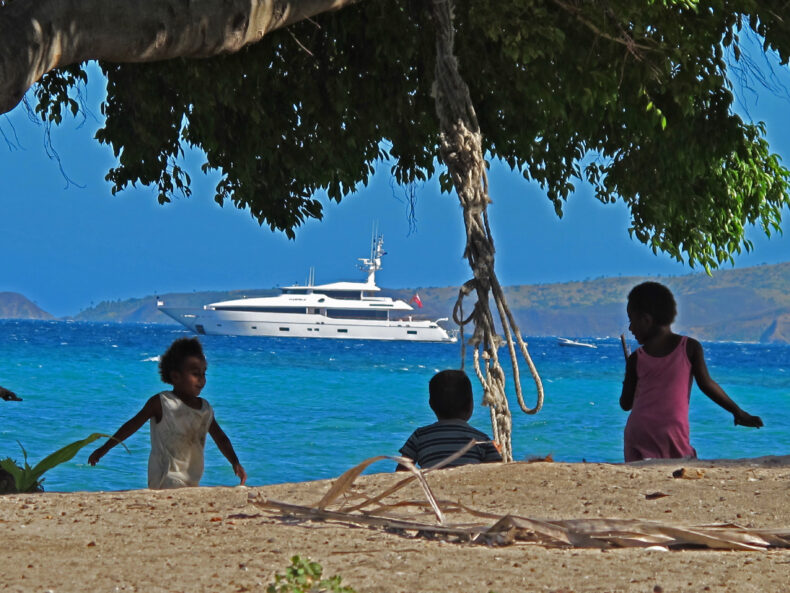 First impressions of MASTEKA 2, lying alongside at Royal Motor Yacht Club on Sydney’s Pittwater, are of a strong, sleek profile that clearly avoids what skipper Carl Brandes amusingly refers to as the “shoebox with a bow” syndrome. Instead, her lines gently taper fore and aft. She looks a no-nonsense, sea-going ship that is, at the same time, most pleasing to the eye.

Officially referred to as “an environmentally-friendly expedition vessel”, she is powered by twin Caterpillar C32s producing 1675 HP each and has a range of 3,700 nautical miles at 8.5 knots or 3,000 nm at 10 knots. That capability is not enormous, by “expedition” standards, but this particular owner has previously operated a Monte Fino 96, Masteka 1, for seven years in vast Asia-Pacific waters and the Med, so he is quite familiar with runs needed between favorite ports. Step aboard, and it becomes immediately obvious that the boat has been very carefully thought out well before the build began. In fact, Sydney-born Brandes confides, they spent two years discussing various options before he went to the Kha Shing yard in Kaohsiung, southern Taiwan, and for a further two years helped to supervise Masteka 2’s construction.

Kha Shing is one of Taiwan’s oldest, largest, and most respected boat builders. They continue to turn out perhaps America’s best-known brand of semi-custom pocket superyachts, on an OEM basis, but by the late 1980s, it became apparent that a new business model was needed, and they should develop their own signature range. Italian yards, then as now, were the principal competition, and the name Monte Fino was chosen. Google it, and a relatively obscure Italian town, pop. circa 1,000, halfway down the Adriatic east coast of the country, comes up. Kha Shing has no record that this tiny mountain enclave, near which flows the River Fino, was the inspiration for a former European dealer who suggested it, but it sounds nice.

That background aside, the Monte Fino 122 is something else, and the realization that it has been developed for a seven-year Monte Fino 96 owner speaks volumes for both the yard and its increasingly repeat clientele.

Many serious Pacific boaters like to troll offshore for game fish, and a glance at the “aft beach” swim platform on Masteka 2 reveals copious rod holders, bait tanks, and barbeques, plus a custom hydraulic swim ladder and Benazoni passerelle for future stern-to Med docking.

Here too are huge garages for one of the two lifeboat-approved custom 15’ and 16’ Castoldi tenders – the other sits aft on the upper deck Sky Lounge – and 125 HP diesel-powered jets give them plenty of oomph. Diving and fishing gear, dive compressors and other watersports accouterments abound, along with general boating utilities. Should a fellow boater need refueling, a bowser is installed to facilitate that service.

The engine room beyond is spotlessly clean, spacious, and well-laid out for ready access. Apart from the twin Cat 32s, there are two Onan 65 KVA generators. Watermakers are Sea Recovery Aqua Whispers. Cruise Air supplies the air-conditioning, and both bow thruster and zero speed stabilizers are Naiads. If fuel is being taken aboard at remote locations, the vessel is fitted with its own anti-contamination and filtering systems.

But possibly the most striking feature here is the very advanced Van Cappellen soundproofing, vibration, and plumbing insulations. This is the outfit that supplies custom services to world-class Feadship superyachts, and Van Cappellen lives up to its formidable reputation. Elsewhere in the vessel, it was impossible to detect the generators running, and voyaging aboard later off the Gold Coast, during an aerial photo shoot, engine noise and motion was remarkably reduced to no more than a barely perceptible purr. Seven layers of insulation are in the floor soles.

Amidships on this lower deck are four guest VIP suites, two with identical queen-sized bed layouts, and two with twins plus a Pullman if needed. The timber used throughout is sophisticated stained cherry, well-textured and not too dark, and in the suites, it is offset by lighter brown or cream leather bed bases and door panels. Spectacular non-opening ports are fitted with solid 15 mm glass to Bureau Veritas specification.

There are an amazing 17 HD LCD screens throughout. They mostly drop-down from recesses in the ceilings, and for guests lying in bed, are adjusted to 110 degrees, the perfect angle for viewing. Ensuites benefit from exotic Egyptian, Spanish and Italian marbles used elsewhere aboard. Towel rails are heated, and imported Italian make-up lights are provided. Outside all four suites is a vestibule and night fridge for easy-access drinks or medicines etc, and circular stairs lead up to the dining room and lounge.

Forward again, but reached only from the galley above, are the crew quarters, consisting of a double captain’s cabin with navigation, engine, and security monitors covering all parts of the vessel, and opposite it, an open-plan laundry, cold storage, and crew mess, which are designed to allow a number of practical applications in port or underway that other crew may wish to consider more closely. Then come two more quite spacious twin-bunk cabins with en suites, and there is another Pullman above the mess for, say, a nanny on a specific shorter voyage.

The principal deck is set up in classic superyacht style, with an aft deck dining table for ten and forward-facing lounges, from which fishing rods can still be kept in view, for example, while sipping a cold cocktail. Heavy-duty glass and stainless steel-rimmed doors leading to the interior lounge and formal dining room open via electronic sensors. Interiors are credited to Dick Young Design of Britain, although one gets the feeling that owner and captain have had as much say in selecting the fittings and fixtures, which include distinct custom GRP pelmets in the ceiling rims, lots of leather, smartly recessed roman blinds over more cinemascope windows, another 52” pop-up HD-LCD screen, an extendable dining table, handily reachable select wine cabinet, and discreet, modulated lighting.

Masteka 2’s galley also smacks of people who have had lots of experience at sea, in its practical layout, and perhaps most noticeable is that it moves away from the often-overwhelming steel industrial concept by using predominantly cream marble benchtops and wooden hues. There are some steel Fisher and Paykel fridges and freezers, plus lots of Miele induction cooktops, ovens, microwaves, and dishwashers.

The master suite forward leads off the starboard entrance vestibule, which also has a day bed, and begins with a small study, leading into a full-beam bedroom with again wide windows, dressers and lounges either side, pop-up HD-LCD screen – everyone aboard can choose their own programs – and a walk-in cedar-lined wardrobe. But the piece-de-resistance has to be the bathroom with its custom curved jacuzzi and marble surrounds. It is not quite a small swimming pool, but given this is a 122’ boat, it is a lot larger than many others we have seen on 180 footers. Some secret recesses are included in the suite. For security reasons we won’t go into this aspect further, beyond mentioning that it is a very sensible arrangement.

Up the spiral staircase once more to the wheelhouse and sky lounge. The owner’s family likes to interact with the “control center” when underway, so these two areas are relatively open plan but fitted with a panel that rises so that the wheelhouse can be shut off from parties back aft when voyaging at night.

“The whole wheelhouse is GMDSS & SOLAS-equipped to a much higher standard than we needed for BV,” says Brandes. “There are back-up systems for everything, and in the case of steering, four possible alternatives. We have five GPS’s availability.” Wing stations are provided for maneuvering alongside, just like on any motor yacht double this LOA.

The sky lounge and well-outfitted bar have a 120” screen that drops for feature movie viewing, and this is enhanced by a 7.1 Dolby digital system. The sub-woofers are located under the lounge seats to give guests a true cinema experience. On the deck aft is a custom CT 3500 Steel Head crane for the second tender, and from here one also ascends to the sun deck, with its carefully thought-out windbreaks and other features. The stainless steel work is simply superb.

Forward of the wheelhouse is another outdoor jacuzzi and sun deck surrounded by lounges, and more steps descending to the bow, where Australian Muir windlasses are installed, as they are on many American, European, and Middle East superyachts.

“All I can say is that this boat offers immensely more than anything else I have seen anywhere near this LOA range,” remarked Brandes. He also indicated that, although fittings and fixtures are all top brands and intentionally over-specified, their deal with Kha Shing was economically attractive too.

Night had fallen when I left. The name Masteka 2 was lit prominently amidships, and somebody was trying the underwater lighting. This is going to be a great boat. After exploring the Great Barrier Reef, she returns to Sydney for New Year’s Eve fireworks, then heads for the South Pacific exploring the islands of New Caledonia, Vanuatu, and Fiji.