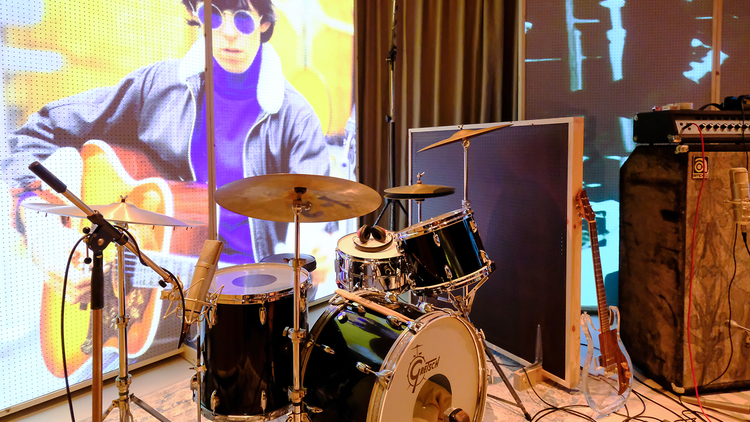 et in the summer of 1959, when the impact of European migration and the rise of women’s liberation is about to change Australia forever, Lisa, aged sixteen, takes a holiday job at the prestigious Sydney department store, Goode’s. There she meets the “ladies in black”.

Beguiled and influenced by Magda, the vivacious manager of the high-fashion floor, and assisting sales ladies Patty and Fay, Lisa is awakened to a world of possibilities. As she grows from a bookish schoolgirl into a glamorous and positive young woman, the impact they have on each other will change all their lives.

Spoil yourself with a secret affair.

The history of magic as an art form has been shrouded in mystery in order to protect its secrets, often being handed down verbally from magician to magician, but in this secret museum of Sydney, this history of wonder and knowledge comes to life.

The Australian Museum of Magical Arts is set within the secret walls and corridors of The Magicians Cabaret theatre. Through personal objects, photos and films, personal mementos, secret plans, books, artifacts you can learn about the mind of a magician and the fascinating role magic has played in cultures.

This museum may be small, but it is packed with information and inspiration. Not just by revealing secrets but by discovering the role magic has played in movies, in war, even in history, you will also experience not just wonder but the beauty of imagination.
You will feel like you are searching, or travelling for the purpose of discovery.

Retrosweat founder Shannon Dooley, a qualified fitness instructor and NIDA graduate fronts one of the fastest-growing workout trends in the inner west. Kitted out in hot-pink Reebok Classics, white legwarmers and a striking bodysuit and crop top combo, Dooley looks like the picture-perfect ’80s icon. Modeling herself on the queens of home video fitness – from Jane Fonda to ‘Physical’ poster girl Olivia Newton-John – our instructor adopts a Workout Barbie pose at the head of the class, in front of a mirrored dance hall. We jump around to Don Henley’s ‘The Boys of Summer’, bust a lung to Boy Meets Girl’s ‘Waiting for a Star to Fall’ and thrust in earnest to the Proclaimers’ ‘I’m Gonna Be (500 Miles)’. Dooley throws in a few quips and flamboyant positions to keep everyone smiling, and one class member claims: “I haven’t done the grapevine for 20 years.” Turns out, neither had we. But aside from a few coordination issues, one never forgets how to shimmy sideways while flailing arms and legs in the right direction. Retrosweat really did what it said on the tin: we danced to 12 original ’80s tracks and we sure as heck worked up a sweat. In fact, Dooley claims a high-intensity workout can burn up to 800 calories per class. But fitness alone isn’t the reason fans flock to the party every week. This class is serious fun – and the 50-minute workout is the added sweetener. Besides, where else can you plunge into a squat while holding a pineapple? “Smells better than a kettle https://www.lifestyle.com.au/health/retrosweat-the-80sstyle-workout-you-need-to-try.aspx

This huge exhibition exploring the Rolling Stones’ rise to stardom and their subsequent impact on pop culture, rock’n’roll, fashion and art is an exclusive Sydney event. It’s setting up at its only Australian destination, the International Convention Centre, from November 17 until February 3, 2019. It will feature more than 500 items from throughout the band’s career, including vintage guitars, lyric books, backstage and touring paraphernalia, album art, and the personal diaries and letters of the Stones themselves. Their style, which defined a generation of rock fans wardrobes, will be on the show, with clothing items worn by the band members from the ’60s till today on display. These will be accompanied by articles from designers who were inspired by or dressed the group, including Alexander McQueen, Prada, Dior, Gucci, L’Wren Scott, Mr Fish and more. If you’ve lived under a rolling stone (sorry) for the last 50 years and aren’t clued up about this genre-defining rock group, the exhibition curators are adamant that you’ll still enjoy your experience. There are 190 original Stones-inspired artworks from the likes of Andy Warhol, David Bailey, and John Pasche to enjoy, alongside an interactive sound deck and recording studio, a film screening narrated by Martin Scorsese, video elements throughout the exhibit, and a big 3D concert finale. The premiere exhibit in London was touted as a wild success, and the US tour of the collection saw similar reviews. Let’s hope Sydney gets just

One of the best free things to do in Sydney is to see a movie at the Art Gallery of NSW. They offer year-round programs of screenings in support of their major exhibitions and they are always impeccably curated. Rare, odd and astonishing classics screen there routinely. The films screen on Wednesdays and Sundays in the comfortable Domain Theatre, down at the bottom of the building, and it’s recommended that you book your seat online, as they often fill up.    To accompany the Masters of Modern Art from the Hermitage exhibition they are presenting Cosmic Futures, a series of visionary Russian movies including works by the great Andrei Tarkovsky.