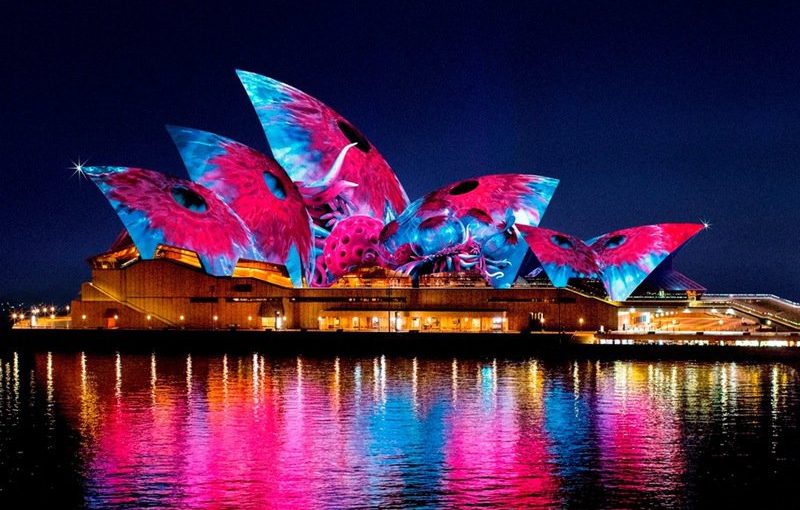 It’s that time of year again! In less than a few short weeks Sydney Harbour will once again be transformed into a magical wonderland of sparkling, glittery lights, beautiful music and ideas. Vivid Sydney is around the corner and this year’s displays are set to be bigger and stronger than ever, attracting guest numbers greater than 2.5 million. For 23 days as of the 26th of May, prepare to be enchanted, astounded and inspired as Vivid Sydney turns your typical winter’s night into a spectacular celebration of light, art, music and ideas from some of the most innovative and impressive individuals on earth.

Although the most recognisable aspect of Vivid is likely to be the terrific light displays, the festival is divided into three most prominent areas: Vivid Light, Vivid Music and Vivid Ideas.

From 6 pm daily, Vivid Light transforms Sydney city into a creative utopia suitable for individuals of all ages to enjoy. Whether you choose to cruise on the Sydney Harbour and watch the magnificent displays from a distance or favour a light walk that winds through The Rocks or from Martin Place to the Botanical Gardens, you are in for a treat. Darling Harbour and Barangaroo boast the most impressive projections and fountain shows that will be sure to leave you in awe.

Vivid Music is an innovative and contemporary music program designed to showcase some of the most talented and daring artists and performers from around the world. You can expect impressive collaborations, live bands, emerging local artists and international acts paired with light and laser spectacles that will not disappoint. Some Vivid Music venues include Carriageworks, Sydney Opera House as well as hotels, bars and clubs around Sydney City.

The Vivid Ideas program presents thought-provoking and stimulating workshops and presentations. You can also expect talks, events and debates by leading industry practitioners and some of the most innovative and creative minds on the planet. It is the ideal place to get inspired, learn and gain new insights and ideas.

I recommend for everyone to attend Vivid this year! I have not missed a year since as long as I can remember, and continue to be impressed with the festival’s innovation and perfect execution.

My favourite way to see Vivid is onboard a vessel- 2.5 million guests is a lot of happy campers and it can be a little overwhelming trying to coordinate an on-land outing whilst so many others are trying to do the same. Being on a boat is to me, a foolproof way to get some nice photos and take in the beauty and magic minus the crowding. Plus, it’s a really special way to spend an evening with family or friends whilst completely taking away the chaotic element out of the occasion.

Whether you’ve already attended Vivid many times, or have an opportunity to experience it for the first time, don’t miss this year’s displays. They’re going to be the best ones yet- and you’ll be sure to have a fantastic evening.

If you’re interested in chartering a private vessel for Vivid, check out our Vivid page or give us a call!